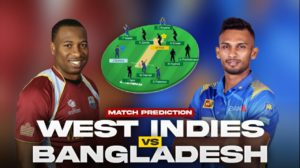 WI vs BAN Dream11 Team Pre Info: The 23th match of the ICC T20 World Cup 2021 will be played between West Indies vs Bangladesh at the venue of Dubai International Cricket Stadium, Dubai.

West Indies and Bangladesh. both the teams are doing there best to win their first match in group, as they both have lost two back-to-back matches. West Indies team, despite having plenty of big hitters in their playing XI, they are not able to score runs. In the previous match West Indies lost to South Africa by 8 wickets with 10 balls left.

Whereas, Bangladesh’s previous encounter was against England which happened to be stressful for the Bangladesh team, as they managed to score only 124 runs and that becomes very easy for a tough team like England . Eventually lost the match by 8 wickets. Shakib Al Hasan has been short of runs in the last couple of matches, which is a sign to worry  for the Bangla Tigers.

The upcoming match is definitely going to be a challenge for both the teams as, it’s a must-win game for both teams to stay alive in the game to take away WC trophy.

WI vs BAN Head to Head: 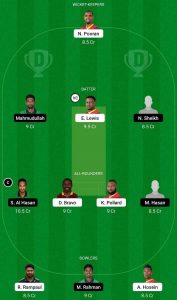 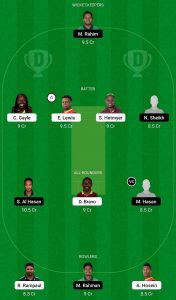 NOTE: While selecting your team, consider the points and make your own decision and make sure to edit the team if there is some change after the toss when playing xi is announced. So, taking help from the above post make WI vs BAN Dream 11 Fantasy Team Prediction.