Delhi Capitals (DC) under the leadership of young Rishab Pant have finally managed to defeat the mighty Mumbai Indians (MI) in match 13 of the Indian Premier League (IPL). They had lost to the five-time champions on four occasions last season and many had thought that MI will win this game comfortably. But the Delhi based franchise had their plans set for the pitch at Chepauk and Amit Mishra turned out to be the hero for them.

The veteran leg-spinner was included in the side for this game quite surprisingly and he didn’t disappoint. Mishra picked as many as four wickets while giving away only 24 runs. He picked important wickets of Rohit Sharma, Ishan Kishan, Hardik Pandya and Kieron Pollard to stun MI who were looking pretty strong with the bat at one stage. Skipper Rohit scored 44 off just 30 balls but his wicket triggered a collapse. MI were reduced to 84/6 from 76/2 in a space of 19 balls.

But Jayant Yadav and Kishan stitched a patient partnership to make sure they got to a fighting total of 137/9 in their 20 overs. Apart from the experienced leggie, Avesh Khan also bowled well returning with the figures of 2/15 in his two overs. 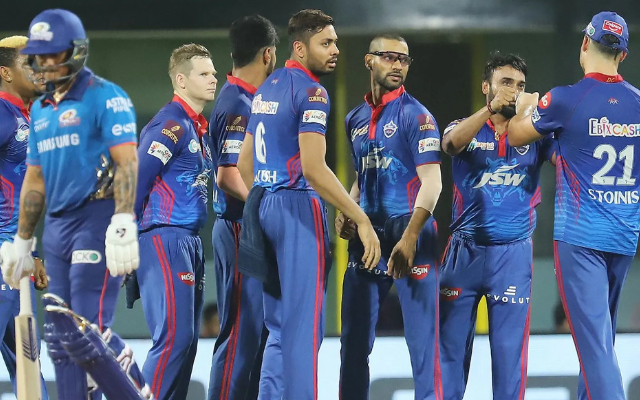 IPL 2021: “Most Ridiculous Captaincy I Have Ever Seen”- Gautam Gambhir Targets Eoin Morgan

“It is Happening Time and Again”- Rohit Sharma

MI captain Rohit Sharma expressed that he was disappointed in the middle-order batsmen of the franchise as they have failed to leave a mark and capitalize on Rohit’s good starts to take the Mumbai Indians to a strong total.

“After the start we got we should have batted better in the middle overs. It is happening time and again. We aren’t able to capitalize on our starts and we need to understand as a batting unit. But you have to give credit to the Delhi bowlers, they kept it tight and kept taking wickets.”

“We knew dew would come in but we have seen that it’s not all that difficult to grip the ball in the last few games. Dew isn’t the factor, we need to play smart cricket to win games which we didn’t do today. [On his injury] It’s only a niggle. It should be fine.” – Concluded Rohit