If you are here for any update on the ongoing ‘rift’ between them, I am sorry, I don’t have any. But what I have is a story that tells you how ‘two’ different personalities with ‘two’ very different starting points went on to become the ‘one’ most talked thing in Indian cricket.

Now, both Virat and Rohit have one common thing between them. They were recognized as future stalwarts of Indian cricket even before they had started their journey in international cricket. Rohit started his cricketing journey in 2007, Virat, the year after that. Both had great starts to their journey and made a name for themselves.

However, one must admit that even then, Virat corrected every weakness of his and got only better with every game. This put him ahead of every competitor that he had, one of the which was Rohit.

A cricketer with talent so brilliant that people saw Sachin in him, Rohit lacked consistency in his game. He was nowhere near Virat until 2013. This was a year after which things changed and people saw Rohit, ‘the opener’, who hit double hundreds for fun when he came out to bat.

This was also the year, when Rohit was given the captaincy of Mumbai Indians after Ricky Ponting had resigned from the job. No one expected much from the young guy as he was just a temporary skipper until someone permanent for the job was found. But not only did he win that IPL, he went on to win 5 more of them. I mean how’s that for a skipper, huh?

So, MS Dhoni’s belief in Rohit as the opener made him one of the greatest white ball cricketers soon after. He legit became the only player who was close to Virat Kohli in ODI cricket.

The captaincy debate started when Rohit won his third IPL and Virat was yet to win one. BCCI also took the matter seriously and made the former, the vice-captain in white ball cricket.

Now that Rohit is made the ODI and the T20 skipper of the Indian team, there is no point talking about who’s better and who’s not.

Let us talk what forced the BCCI to take this decision.

Now, as good a skipper you are, you just can’t keep on winning those bilateral series and fail in the ICC events. This is what happened with Virat Kohli.

He failed to even win a single ICC tournament and those losses against Pakistan in the Champions Trophy Final, 2017 and the recent one in the T20 World Cup didn’t help his case either. He is also yet to win an IPL as a captain which he will probably not now as he has called it time as the skipper of the RCB.

Rohit, on the other hand, kept on winning IPL titles every now and then. When given the job to lead the Indian team, he got home the Asia Cup too. So, his records as a leader were vouching his case as the captain more than anyone else.

Now, people often compare Rohit Sharma’s cool and composed nature with the MS Dhoni style of captaincy. They even went on to say that this particular approach and calmness is needed to win a big pressure game in an ICC tournament.

Virat is but different. He likes to express all the emotions that boil in him and people call that ‘aggressive’ sometimes.

But the same intensity and aggression had once made Australia the most dominant team for about a decade. So, I believe there is nothing wrong with this approach too.

And as far as the trophies are concerned, even Sourav Ganguly does not have an ICC trophy under his belt. So, does that make him any less of a skipper? 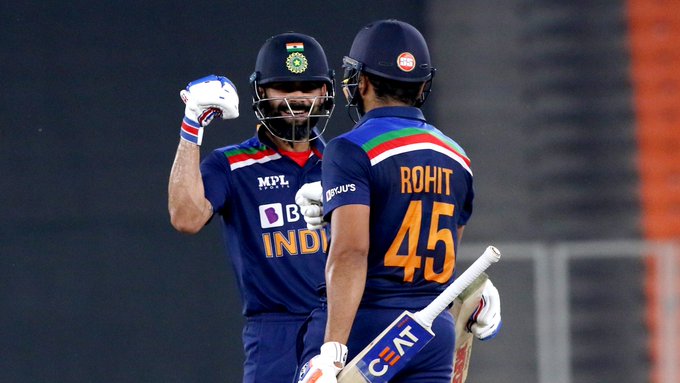 Virat and Rohit: Are they friends and do they need to be?

2 players at the top of their game constantly pushing to become the best in world. Obviously, there will be competition.

We are talking about two professionals who thrive to make sure that their team is in the winning position every time. Do they need to be the best of friends for doing this? I don’t think so.

Both respect the other’s game and Virat has admitted it multiple times that Rohit is the best white ball player of his time. You wouldn’t say that for a cricketer you hate.

For real, have you seen both of them fighting and arguing on the field for even once? Has the ‘expressive’ Virat expressed this even once on the cricket ground?

If you ask me, I only see two players, very passionate about their game, doing the very best in their capacity to win matches for India.

So, this was about it on the Rohit-Virat scenario and you must have realized that the subject made news because there was no other news. The rumours surfaced somehow and the social media made sure that they fly to every individual’s phone screen as a headline.