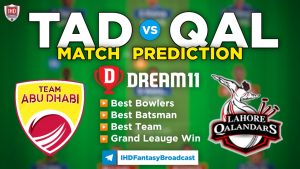 QAL vs TAD Dream11 Pre INFO:  The 3rd Place Play-off of T10 League 2021 will be played between Qalandars vs Team Abu Dhabi on the venue of Sheikh Zayed Stadium, Abu Dhabi.

After dominating the group stage by winning 5 games in a row Qalandars lost their track at the end by losing 2 back to back games which dragged them out of the final of T10 league 2021. Qalandars will be upset with their recent performances as they had a great chance to win the trophy here as the way Qalandars were playing in group matches but now they have to give their best to at least finish the tournament on 3rd slot by beating Team Abu Dhabi but this won’t be easy as Qalandars are looking a bit off-colour since previous 2 matches.

On the other hand, Team Abu Dhabi got their form back on the right time they were almost in the final but then the heroic from Lendl Simmons and Rovman Powell helped Northern Warriors to knock TAB out of the race to final. Team Abu Dhabi was struggling at the start of the tournament but they made a great comeback at the end of the group stage by winning 2 games in a row to make it through the playoffs and they won the 1st eliminator as well against the same opponent Qalandars but just fall by a tiny margin in the Eliminator 2 against Northern Warriors and now they have to face Qalandars again for the 3rd place play-off.

This is going to be a great match as both the teams have great players of short format and its difficult to predict but Team Abu Dhabi has a better chance of winning it. 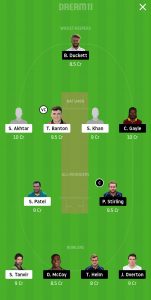 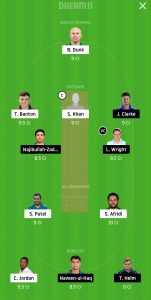 While selecting your team, consider the points and make your own decision and make sure to edit the team if there is some change after the toss when playing xi is announced. So, taking the help from above post make QAL vs TAD Dream11 Team.