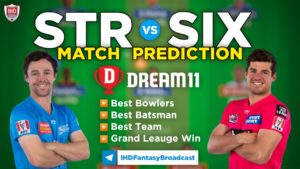 STR vs SIX Dream11 Team Pre Info: The 52nd match of the Big Bash League 2021-2022 (BBL) will be played between Adelaide Strikers vs Sydney Sixers at the venue of Adelaide Oval, Adelaide.

Adelaide strikers are number 4 on points table as they have won few back to back matches in the tournament recently. Now this match is a must win match for strikers and even if they won this match their place in playoffs is still not confirmed. So they have to win with big margin.

On the other hand, Sydney sixers started the season very great but lost the momentum in between and currently are at number 2 at points table. Sydney has 2 matches left nd they need to win  at least one match to confirm their participation in knockouts.

The 52nd match of the BBL 2021-22 will be played between Adelaide Strikers vs Sydney Sixers at the Adelaide Oval, Adelaide.

STR vs SIX Head to Head: NOTE: While selecting your team, consider the points and make your own decision and make sure to edit the team if there is some change after the toss when playing xi is announced. So, taking help from the above post make STR vs SIX Dream 11 Fantasy Team Prediction.