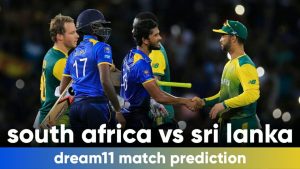 SL vs SA Dream11 Team Prediction Pre info: The 2nd ODI match of the three-match ODI series between Sri Lanka vs South Africa will be playing at the venue of R.Premadasa Stadium, Colombo.

The hosts already took a lead by winning the 1st match by 14 runs in full of intense and thriller match. Avishka Fernando’s brilliant knock of 118 runs took the hosts to the massive score of 300 runs on the board which they defended very well by restricting South Africa at the score of 286 runs. This win will matter a lot for Sri Lanka as they have been performing very poor from past few series and this win will definitely boost up their confidence. They are now just one step away from winning the ODI series.

On the other hand, South Africa performance;s was impressive too, but they end up with a short of 14 runs. Aiden Markram played responsive innings of 96 runs where as Rassie van der dussen scored 59 runs. Now, the visitors are lagging the series by 0-1 and they need a definite win over here to level the series otherwise they’ll just end up by lossing the series.

SL vs SA Head to Head: 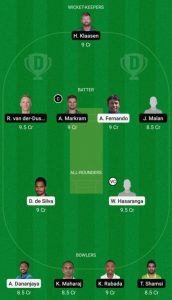 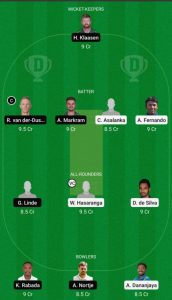 While selecting your team, consider the points and make your own decision and make sure to edit the team if there is some change after the toss when playing xi is announced. So, taking the help from the above post make SL vs SA Dream11 Team.