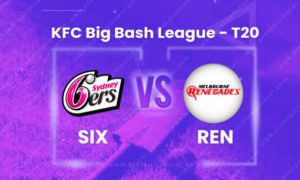 SIX vs REN Dream11 Team Pre Info: The 30th match of the Big Bash League 2021-2022 (BBL) will be played between Sydney Sixers vs Melbourne Renegades at the venue of International Sports Stadium, Coffs Harbour.

Sydney Sixers are playing really well since the league has started, they have won every match except for one & has secured the top position on the point table. However their previous win very close against  Brisbane Heat by only 2 wickets . Now they are looking forward to register another win to remain in the race for the trophy.

Whereas, Melbourne Renegades performance is exactly opposite as they have been playing really bad since the league has started & have only won 1 game with very difficulties out of 6 matches. Not able to gain the winning momentum in the previous matches they have played. But still they are looking forward to win the upcoming match against the top contender of the tournament.

The 30th match of the BBL 2021-22 will be played between Sydney Sixers vs Melbourne Renegades at the International Sports Stadium, Coffs Harbour.

SIX vs HEA Head to Head: 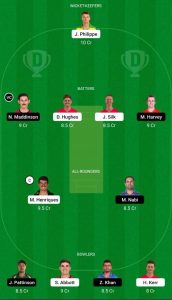 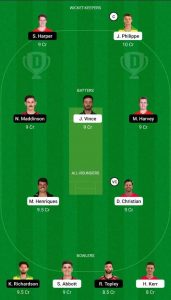 NOTE: While selecting your team, consider the points and make your own decision and make sure to edit the team if there is some change after the toss when playing xi is announced. So, taking help from the above post make SIX vs REN Dream 11 Fantasy Team Prediction.