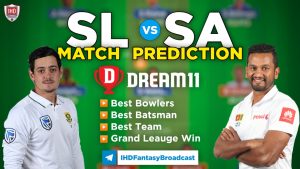 SA vs SL Dream11 Team PRE INFO: In this post, we will discuss the 2nd Test Match of SA vs SL. Match 02 of 2 match Test series which will be played between South Africa and Sri Lanka. The 2nd Test match will be played at The Wanderers Stadium, Johannesburg. South Africa ended 2020 with a win and now they are eying to start 2021 with a win too and the newly appointed captain Quinton de Kock got the victory in his 1st match as a captain SA completely outplayed Sri Lanka in the 1st test match where they won by an innings and 45 runs but now they have to continue the winning run to whitewash the visitors.

On the other hands, Sri Lanka did well in the batting in the 1st inning of the 1st test but after that, their bowlers were thrashed badly by the South African top order and which led them to defeat and other than bowling SL is facing fitness issues as their 6 players got injured in the 1st test which is also a big concern for the team so Sri Lanka have to work really hard to get a win here and to avoid the whitewash.

South Africa is having home advantage and they do have a better team on paper so SA will be the favorite here. 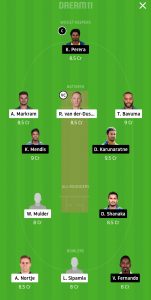 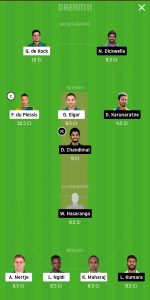 NOTE: While selecting your team, consider the points and make your own decision and make sure to edit the team if there is some change after the toss when playing xi is announced. So, taking the help from above post make SA vs SL Dream11 Team.