A temperamentally strong solid opening Ruturaj Gaikwad born in Pune before moving to Mumbai. His stance and batting style just as same veteran Rohit Sharma. Ruturaj completely inspired by Brendon McCullum’s scoop shot in a match between Australia and New Zealand. This made him fall in love with cricket. And later on, he joined cricket Vengsarkar Cricket Academy at the age of 11.

Ruturaj grabbed the eyeballs of media platforms when he ended up the 2014-15 Cooch Behar Trophy as the leading run-scorer with 826 runs in 6 games with the help of three centuries and alone half-century.

He made his first-class debut for Maharashtra’s Ranji team in 2016-17, at the age of 19. His decent outing earned him a spot in India A for ACC emerging Asia Cup 2018 where he hammed sir Lankan A with unbeaten 187 not out and followed by 125 not out in the next game. After the successful 2018-19 season for the Ruturaj, he was picked by Chennai Super Kings for 20 lacs. After getting out cheaply in his first match, he scored back to back 3 half centuries of CSK. Apart from a decent start to his career, he might be hoping for a national call. 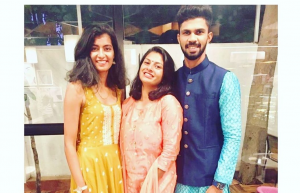 Controversies did by Ruturaj Gaikwad

The All Out Cricket Post Interview of Ruturaj Gaikwad

I hope you guys will love the article about Ruturaj Gaikwad biography, you can also check out more cricket news by clicking here, play fantasy cricket on dream11 to win some real cash.