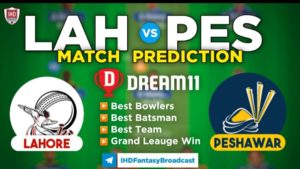 PES vs LAH Dream11 Team Pre Info: The 17th match of Pakistan Super League 2021 will be played between Peshawar Zalmi vs Lahore Qalandars at the venue of Sheikh Zayed Stadium, Abu Dhabi.

Peshawar Zamli is going to start the Abu Dhabi phase of PSL 2021 against table-topper Lahore Qalandars. Peshawar Zami has bagged 3 victories in their 5 matches before the tournament was postponed. Now Peshawar Zalmi will have to restart their campaign with many new faces and they have to find a decent team combination as many of their key players who were part of the team in earlier matches are not playing with PZ anymore but Zalmi got a pretty decent squad and they will surely give a good fight to all other teams.

On the other hands, Lahore Qalandars started their 2nd phase of PSL 2021 with a win against Islamabad United which led them on the top of the points table with 4 victories in 5 matches they have played so far. Lahore Qalandars will be pretty happy with their performance in the previous match even though there were a few things which they can improve and they will surely improve those as Lahore Qalandars are not looking in any mood to leave that top spot and they will try to get a win here to get the winning momentum going.

The 17th match of the Pakistan Super League 2021 will be played between Peshawar Zalmi and Lahore Qalandars at the Sheikh Zayed Stadium, Abu Dhabi.

PES vs LAH Head to Head: 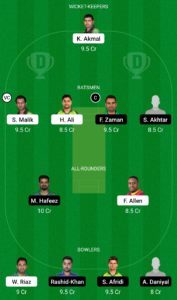 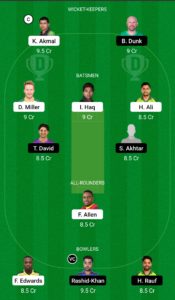 NOTE: While selecting your team, consider the points and make your own decision and make sure to edit the team if there is some change after the toss when playing xi is announced. So, taking help from the above post make PES vs LAH Dream 11 Fantasy Team Prediction.