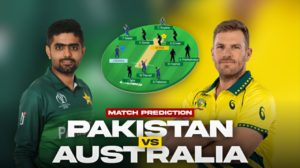 PAK vs AUS Dream11 Team Pre Info: The 3rd ODI match of the Three-match ODI series between Pakistan and Australia will be played at the venue of Gaddafi Stadium, Lahore.

The series is currently tied 1-1. After an opening defeat, Pakistan bounced back to win the second ODI by 6 wickets. Batting first, Australia posted a total of 348/8. It was a complete batting performance with runs coming from Head (89), McDermott (104), Labuschagne (59), and Stoinis (49). Shaheen Afridi returned for Pakistan, picking four wickets.

On the other hand, Pakistan’s top order set the tone for their win in the second ODI match Fakhar Zaman scored 67. Imam Ul Haq (106) and Babar Azam (114) struck centuries as well. Now Pakistan will look to win this ODI and win the series.

The 3rd ODI match of the Three-match ODI series between Pakistan and Australia will be played at Gaddafi Stadium, Lahore.