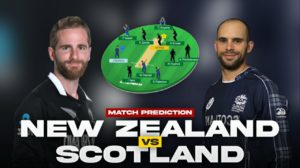 NZ vs SCO Dream11 Team Pre Info: The 32nd match of the ICC T20 World Cup will be played between New Zealand vs Scotland at the venue of Dubai International Cricket Stadium, Dubai.

New Zealand won their last match quite easily against and is very happy as they have moved a step closer to grab the semi- final spot from group 2. But to secure their position for semi-final match New Zealand have to win their all the upcoming matches which are against easy opponents and they are definitely eying Semi-final berth.

Whereas, Scotland was looking really promising in the qualifying stage but they are performing pretty average in the super 12 stage as they have lost both their matches till now. they lost their previous match against Namibia, but Scotland team have potential players and can even win the match with a great score as they did in the qualifying matches where they beat Bangladesh and topped the group.

The 32nd match of the ICC World Cup T20 will be played between New Zealand vs Scotland at the Dubai International Cricket Stadium, Dubai.

NZ vs SCO Head to Head: 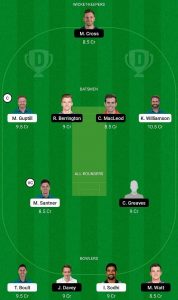 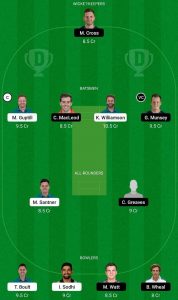 NOTE: While selecting your team, consider the points and make your own decision and make sure to edit the team if there is some change after the toss when playing xi is announced. So, taking help from the above post make NZ vs SCO Dream 11 Fantasy Team Prediction.