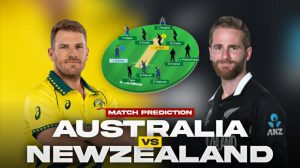 NZ vs AUS Dream11 Team Pre Info: The Final of the ICC T20 World Cup 2021 will be played between New Zealand vs Australia at the venue of Dubai International Cricket Stadium, Dubai.

New Zealand, the perfect balanced team out there in the tournament made their ways to finals by defeating England in the semi-finals. Especially the way they did comeback in previous match and Jimmy Neesham’s effective knock snatched the win from England and led his team to victory. Despite having a bad start, Blackcaps made a strong comeback and won back to back matches and astonished everyone with their cricket.

On the other hand, Australia showed everyone why they are considered as the best cricket team in T20I format. There was the time when they are lagging with huge margin but the hard hitting of Matthew Wade at the end made Australia  into finals. Wade finishes off in the style by smashing 3 sixes in a row and played a much needed innings for his team. Both of the teams are in their red hot form and it’s defnitely gonna be nail-biting match. The winner will lift the trophy of T20I World cup 2021

The final match of the ICC World Cup T20 2021 will be played between New Zealand vs Australia at the Dubai International Cricket Stadium, Dubai.

NZ vs AUS Head to Head: 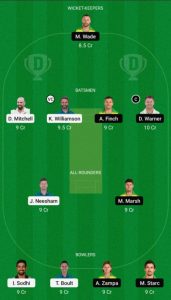 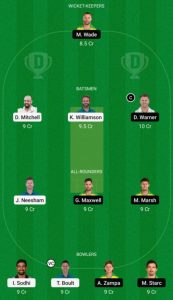 NOTE: While selecting your team, consider the points and make your own decision and make sure to edit the team if there is some change after the toss when playing xi is announced. So, taking help from the above post make NZ vs AUS Dream 11 Fantasy Team Prediction.