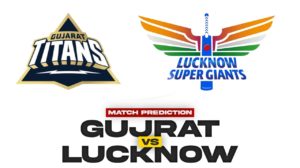 LKN vs GT Dream11 Team Pre Info: The 57th Match of the Indian Premier League 2022 (IPL 2022) will be played between Lucknow Super Giants vs Gujarat Titans at the venue of Maharashtra Cricket Association Stadium, Pune.

Lucknow Super Giants are table toppers and will look to win this match and confirm their position on points table. In the last match they played, Lucknow continued their dominant run with a 75-run win over Kolkata Knight Riders. Quinton de Kock (50) and Deepak Hooda (41) took them 176/7. They then bowled Kolkata out for just 101. Avesh Khan and Jason Holder picked up three wickets each.

Meanwhile, Gujarat Titans lost their second consecutive game against Mumbai Indians. Mumbai posted a challenging total of 177 on the board. Rashid Khan picked up two wickets. Gujarat Titans were going well in the chase. However, they fell short by just 5 runs in the end, finishing 172/5. Wriddhiman Saha and Shubman Gill scored fifties at the top. Gujarat Titans are also on the verge on the qualifications for playoffs and are at number 2 on points table. They will also look to win this match after 2 consecutive defeats.

The 57th Match of the IPL 2022 will be played between Lucknow Super Giants vs Gujarat Titans at Maharashtra Cricket Association Stadium, Pune.

LKN vs GT Head to Head:

KL Rahul is the backbone of Lucknow’s batting lineup and he is also at 2nd position on orange cap list so he is a must pick.

Hardik Pandya is leading Gujarat Titans from the front and also played very vell in this edition of TATA IPL so he must be picked in dream11 team.

Avesh Khan is performing very well for Lucknow and currently he is highest wicket taker for Lucknow Super Giants so he can not be missed in dream11 team.

Deepak Hooda is controlling the middle order for LSG and he is doing it really well he is a really good pick for captain in the grand leagues.

Rashid Khan has also found his form and his batting skills make him a more valuable player Rashid Khan is a must-pick player in the fantasy leagues. NOTE: While selecting your team, consider the points and make your own decision and make sure to edit the team if there is some change after the toss when playing xi is announced. So, taking help from the above post make LSG vs GT Dream 11 Fantasy Team Prediction.