Jasprit Bumrah, currently, one of the best all-format pacer in the world, married Sports Presenter Sanjana Ganesan earlier this March in a private ceremony in Goa.

The Indian paceman has recently revealed about his first meeting with his wife Sanjana. According to him, both of them thought of each other to be arrogant when they met for the first time.

“I had obviously seen her a lot of times but we had the same problem with each other. She thought I was really arrogant, I thought she was really arrogant so we never really spoke. I spoke to her for the first time during the 2019 World Cup when she was here covering the event. We became friends and started talking a lot. It’s been good, we have been married for five months now, so yeah very happy,” Jasprit Bumrah said while chatting with Dinesh Karthik for Sky Sports. 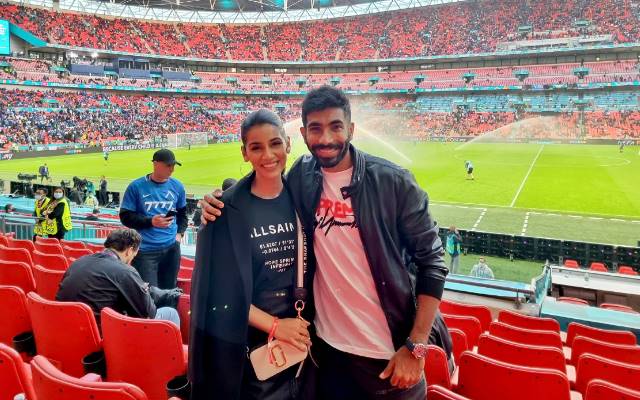 “She understands the sport, she understands what the player goes through, so whenever things don’t go well or go well, we have a lot of interesting conversations, that really helps me.

”And, obviously, playing cricket and travelling all the time, you’ve got your wife with you now, so, you really have to focus on other things as well. You can switch off after the game. All these factors are really helpful and I’m really happy how this relationship has developed,” Bumrah concluded.

WATCH: Virat Kohli’s Reaction When Rohit Sharma Gets to His Hundred with a SIX !

Jasprit Bumrah is touring with the Indian team currently in England and is among the highest wicket-takers of the series.