Mumbai Indians lead paceman Jasprit Bumrah has been trolled heavily after experiencing an absolute horror show against CSK. Bumrah, who is known to be a death over specialist, was taken down by the CSK batsman for a truck load of runs.

After being asked to bat first, the CSK batters went hard after Mumbai’s best bowler, scoring 56 runs off his four overs. This was the most expensive spell for the speedster in the history of the IPL.

CSK finished with 218 runs, their highest-ever total against the Mumbai Indians. However, a score as big as that, was also chased down by Mumbai due to some unbelievable hitting by Kieron Pollard. 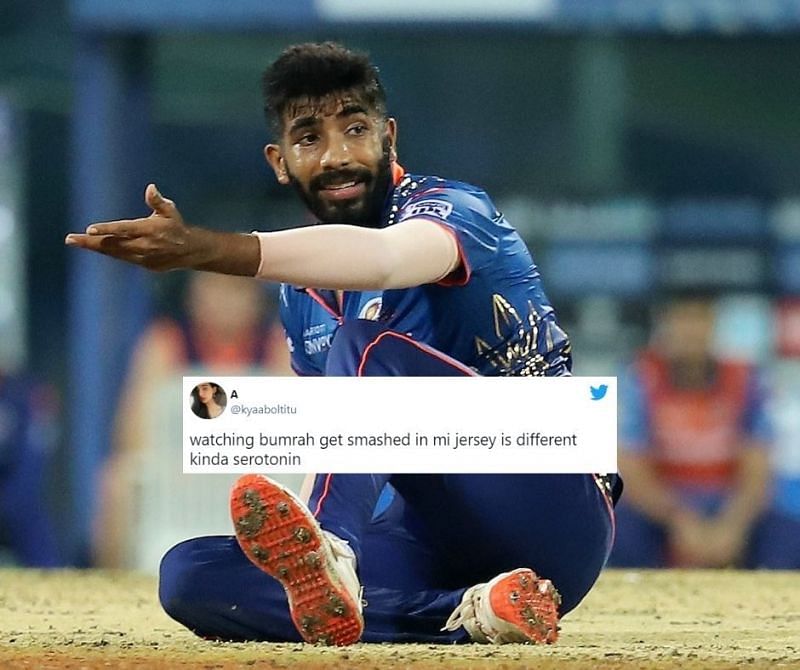 Twitter Erupts as Jasprit Bumrah Gets Hit for 56 Runs

Fans on Twitter were disappointed by the way the MI bowlers, especially Jasprit Bumrah, leaked runs at the death. 82 runs were conceded in the concluding five overs and no MI bowler could stop the smashing from Ambati Rayudu.

This is the most runs conceded by Jasprit Bumrah in a IPL match – 1 for 56 from 4 overs vs #CSK.

#CSKvMI
Bumrah at the end of his innings:- pic.twitter.com/pnYRvbXAze

What a knock from Ambati Rayudu, 72 runs from just 27 balls including 4 fours and 7 sixes at a strike rate of 266.7 against a bowling attack lead by Bumrah.

What a freak knock from Rayudu, took down Bumrah and he completed fifty from just 20 balls including 3 fours and 5 sixes – 42 runs through boundaries at a strike rate of 265. #IPL2021

Bumrah most expensive over in IPL history 4-0-56-1
today against #CSK
Meanwhile Rayudu pic.twitter.com/GXxslR6ra5