Mumbai Indians skipper Rohit Sharma is usually praised very highly for his smart and cool captaincy skills. However, the masterful batsman has been criticized by the MI fans heavily for dropping young batsman Ishan Kishan in the franchise’s 6th encounter agaisnt the Rajasthan Royals.

The southpaw was replaced by Aussie paceman Nathan Coulter-Nile.

The 22-year-old youngster has had a pretty rough patch of form lately, having scored just 73 runs in five games of the IPL 2021 season. Ishan Kishan’s inconsistency certainly cost MI heavily in their Chepauk leg where they lost three out of the five games that they played.

The addition of Coulter-Nile gives the defending champions an extra bowling option and he can also come in handy with the bat down the order. 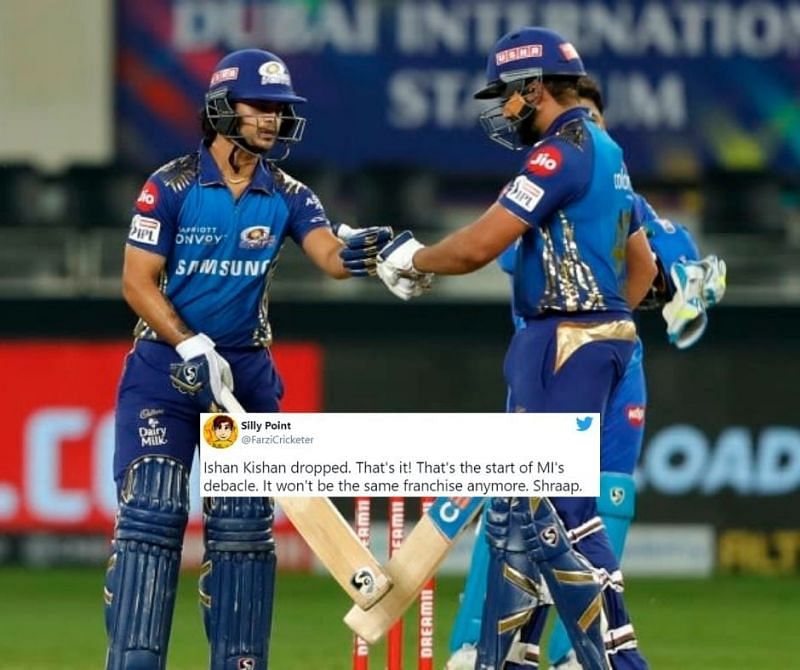 MI skipper Rohit Sharma was heavily slammed after dropping a talent like Ishan Kishan. Here is what twitter had to say.

BTW Ishan Kishan top scored for MI last year, hit most 6s, looked most comfortable against rabada and anrich. But Jayawardene will tell you Ishan Kishan has AtTiTuDe PrObLeMs

Most supportive and backing captain in IPL dropped Ishan Kishan from playing 11 after few bad innings . 🤡

Life came to a full cycle for Ishan Kishan. Feel very bad for him. Mumbai Indians are finally playing at a batting strip, after playing 5 matches at a difficult Cheapuk pitch, & he is taken off the team. Harsh call, for someone who was MI's best batsman last IPL.#MIvRR #IPL2021 pic.twitter.com/RwbKFEplkC

Ishan Kishan dropped. That's it! That's the start of MI's debacle. It won't be the same franchise anymore. Shraap. #IPL

If you would remember, Ishan Kishan was the highest run-scorer for the defending champions in the IPL 2020 with a staggering 516 runs to his name at an amazing average of 57.33 and a strike-rate of 147.65. With the help of that, MI won their fifth IPL title and the young left-hander received his maiden India call-up against England.

On his international debut, Ishan Kishan smashed a half-century at the top of the order, strengthening his chances of a place in India’s T20 squad for the upcoming World Cup.

However, just a few bad matches at the start of the IPL 2021 were enough to make him seat in the pavilion.