Ravindra Jadeja is an absolute champion in the field. The all-rounder is considered the one of the best fielders in the world. However, he does not fail to entertain with the bat too.

Some cracking shots were seen from Sir Jadeja, as he is fondly called, in CSK’s encounter against the Royal Challengers Bangalore. 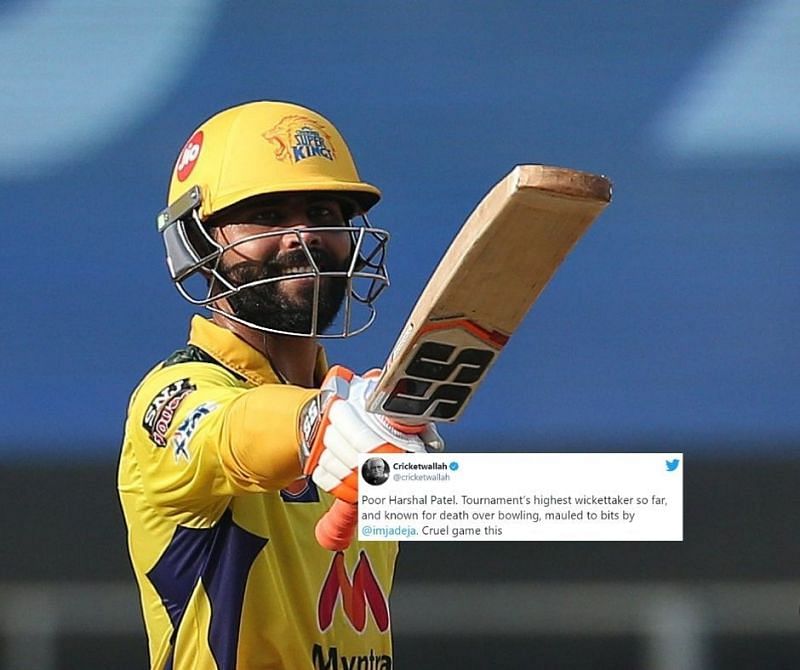 The CSK all-rounder slammed RCB’s death bowling specialist Harshal Patel for a record-equalling 37 runs in the last over of the game. He thus emulated Chris Gayle’s feat of scoring the highest runs in an over during an IPL match. Back in 2011, the RCB batsman had hammered Kochi Tuskers Kerala’s Parameswaram for 37 runs.

Jadeja’s hard-hitting helped the three-time IPL champions post a mammoth 191-4 in their 20 overs against RCB. He scored a blistering 62 runs off just 28 balls that included 4 fours and 5 sixes.

Harshal Patel had a great stint up until that point, with three wickets to take his tally for the tournament to 15. But little did the Purple Cap holder know what was about to hit him and RCB.

Adding to his batting masterclass, Jadeja took  3 wickets giving away only 13 runs in his 4 overs. Because of his commendable all-round performance, CSK won the match comfortably by 69 runs.

Ravindra Jadeja giving PTSD to RCB since the dawn of ages. pic.twitter.com/YtzGWno0aY

Hitting 37 runs in a single over of purple cap holder is not for everyone, unless you are Sir Ravindra Jadeja ! 🙇‍♂️🔥 pic.twitter.com/94eZnXpuYy

How everyone sees Harshal Patel

Ravindra Jadeja has been a beast with the bat since the last IPL. His batting is a massive plus point for CSK and India.