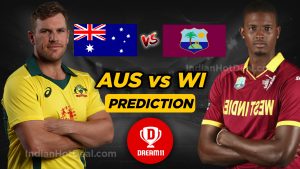 PRE INFO: Both AUSTRALIA and WEST INDIES won their 1st game of ICC world cup and Now they face each other in This 10th match of the world cup at TRENT BRIDGE, NOTTINGHAM.

This is the 10th match of ICC World Cup 2019 Australia and West Indies will face each other and this at the Trent Bridge, Nottingham

The Trent Bridge has often known to produce the featherbeds. The surface used for England-Pakistan encounter was a belter but the Windies won’t mind some help from the pitch. The team winning the toss is expected to bowl if the conditions are overcast.

AUS vs WI Head To Head :

While selecting your team, consider the points and make your own decision and make sure to edit the team if there is some change after the toss when playing xi is announced. Make Your IND VS SA dream11 team Now by above prediction!