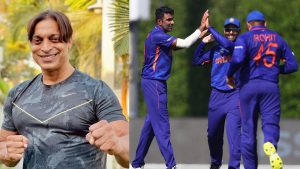 Shoaib Akhtar gave a hilarious advice to Pakistan about defeating India in Sunday’s bumper T20 World Cup match in Dubai. In a online interview, the former Pakistani pacer jokingly remarked that pakistani team should give sleeping pills to Indian players before the match if they want to win. He also asked them to stop Virat Kohli from using his Instagram and even requested team mentor MS Dhoni not to come and bat himself.

Shoaib was saying this jokingly as Pakistan has never won against India in any world cup match till now, whether it is ODI World cup or T20 World cup. In T20WC, Pakistan and India has played 5 matches till now and all the matches has won by Indian team.

Shoaib Akhtar then spoke on serious note, gave his actual advice. He asked Pakistani openers to provide a good start, avoid playing dot balls . He also asked the bowling attack to be aggressive while defending a  total. He said in the interview that if Pakistan want to win this match, they have to outperform India in each and every department whether it is batting, bowling or fielding. If we see the overall record of India against Pakistan than India has won 7 of total T20 international  matches from total of 8 while Pakistan has managed to won only 1 match against India.

When shoaib was asked to pick Pakistan’s player to watch out for the match, Shoaib Akhtar chose Asif Ali. Asif ali has played 29 T20Is for Pakistan, scoring 344 runs at an average of 16.38 and a strike rate of 123.74. Shoaib gave a reason to pick asif ali as he sdia Asif Ali can be a finisher for Pakistan as he can strike the bowl in the lower order, so he can be a player to look out for.