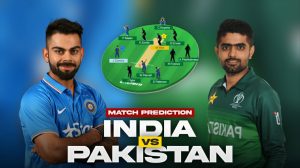 IND vs PAK: Five Player Battles To Watch out for

KL Rahul is in great form and he was 2nd highest scorer of this year’s IPL KL Rahul also performed very well in warmup matches and it is almost confirmed that KL Rahul will open with Rohit Sharma in this match. On the other hand, shaheen afridi is a very good swing bowler who is known to take early wickets for his team. Rahul was looking very good in warm-up games and was showed his power in the powerplays. So Afridi’s form will be crucial for Pakistan.

This will be a battle between India’s best pace bowler vs Pakistan’s best Batsman. Babar Azam can be very dangerous for India as he is the one of the best batsman in the world right now and a world class bowler like bumrah can get rid of babar in powerplays. As we saw in warmup matches, Babar was struggling against yorkers and Bumrah is the best bowler in the world to bowl those toe-crushing yorkers.

Varun Chakravarthy is India’s mystery spinner and he has very good record in T20s. He took 18 wickets in IPL 2021 with the economy of just 6.5 and will very helpful to destroy middle order of Pakistan. On the other hand, Pakistan has experienced player like shoib malik in middle order who is very experienced to this format of the game. So it will be very interesting to see how varun and other Indian spinners will bowl to them.

Mohammed Shami is the most experienced Indian bowler in the Squad and is in great form. While Mohammed Rizwan is the highest run scorer in T20 this year. It will be very important for India to get rid of Rizwan as early as possible and Mohammed shami can do this work as he is in great form and took 3 important wickets in first warm-up match against England. Also he was one of the leading wicket takers in this edition of IPL too. So shami can be very handy in conditions of UAE.