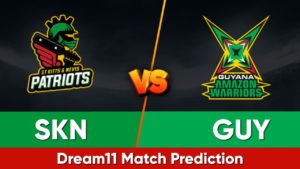 GUY vs SKN Dream11 Team Pre Info: The 2nd Semi-Final of Caribbean Premier League 2021 will be played between Guyana Amazon Warriors vs St Kitts and Nevis Patriots at the venue of Warner Park, Basseterre, St Kitts.

Guyana and patroits both finished league table with 12 points each but due to better run rate, Guyana was placed on 2nd place while patroits was on 3rd. Guyana has better overall record against patriots but in this season they lost both matches against patroits. Now it will be interesting to see whether guyana will make a comeback or patroits will beat them third time this year.

The 2nd Semi- Final of the CPL 2021 will be played between Guyana Amazon Warriors and St Kitts and Nevis Patriots at the Warner Park, Basseterre, St Kitts.

GUY vs SKN Head to Head in CPL: 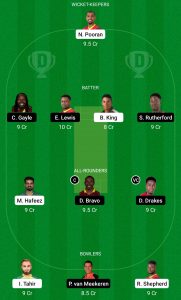 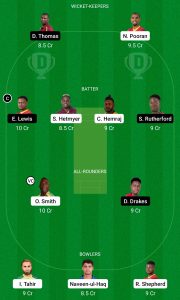 NOTE: While selecting your team, consider the points and make your own decision and make sure to edit the team if there is some change after the toss when playing xi is announced. So, taking help from the above post make GUY vs SKN Dream 11 Fantasy Team Prediction.