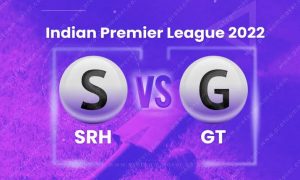 GT vs SRH Dream11 Team Pre Info: The 21st Match of the Indian Premier League 2022 (IPL 2022) will be played between Gujarat Titans vs Sunrisers Hyderabad at the venue of Dr DY Patil Sports Academy, Mumbai.

Gujarat Titans are playing really good cricket as they didn’t lose a single game till now. They have won all of their 3 matches till now and currently standing at 2nd spot with 6 points. They won their previous game i.e against Punjab Kings by 6 wickets where Rahul Tewatia smashed 2 sixes on last 2 balls and wins the match for his team.

On the other hand, Sunrisers Hyderabad have finally won the first game in the tournament i.e against CSK in previous match. They won the game by huge margin of 8 wickets and Abhishek Sharma played a super knock of 75 runs and Rahul Tripathi have smashed 39 runs in just 15 balls. They’ll look forward to win next game too.

The 21st Match of the IPL 2022 will be played between Gujarat Titans vs Sunrisers Hyderabad at the Dr DY Patil Sports Academy, Mumbai.

Both teams are playing against each other for the first time.

GT vs SRH Head to Head:

Currently, Shubman is the highest run scorer for the GT team as he scored 96 and 84 runs in the recent games. He is a good choice for C/VC for your dream11 team

Rahul Tripathi played brilliant innings of 39, 44 runs in the last 2 games and played major role in the winning of previous game against CSK.

Mohammad Shami have been pretty effective from the beginning of the tournament as he taking number of wickets in each game.

All-rounder of SRH, Washington Sundar is a key player of SEH as he can smash runs when needed and take wickets with his bowling aswell.

One of the top class batsmen Kane Willaimson has scored 32 runs in the last game He plays an significant role in SRH batting lineup but it’s not much effective in the past few games but you should not miss him in your dream11 team as he might comeback anytime thus avoiding him in your team could lead to severe loss. 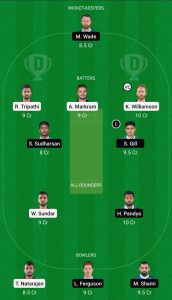 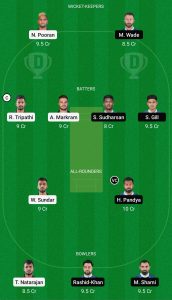 NOTE: While selecting your team, consider the points and make your own decision and make sure to edit the team if there is some change after the toss when playing xi is announced. So, taking help from the above post make GT vs SRH Dream 11 Fantasy Team Prediction.