After, Krunal Pandya getting tested positive for the Corona virus, two more Indian  cricketers, namely, Yuzvendra Chahal and Krishnappa Gowtham also were tested the same. These two were part of the eight people who were in close contact with Krunal so were isolated after the all-rounder was confirmed positive.

Following this COVID positive case, the second T20I between India and Sri Lanka was postponed for a day.

The three-match T20I series concluded on July 29 and the rest of the Indian squad will leave for India immediately. On the other hand, Krunal Pandya and the other close contacts will continue to be in the isolation in Sri Lanka itself. Krunal was shifted to the other hotel soon after he was tested positive while the other eight players were in the same hotel as rest of Indian team members but were separated from them. 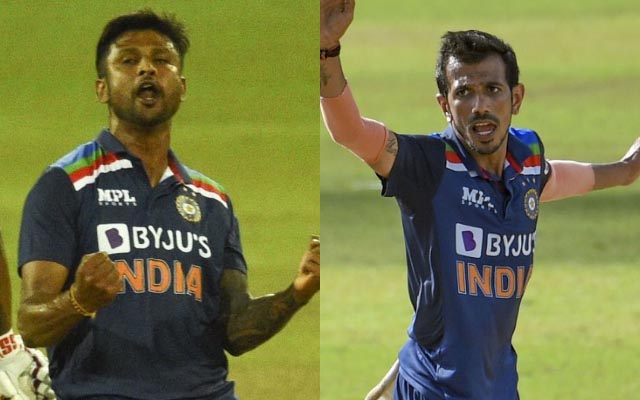 The six other players who are in isolation are Hardik Pandya, Ishan Kishan, Suryakumar Yadav, Prithvi Shaw, Manish Pandey and Deepak Chahar. ESPNCricinfo reported the news of leg-spinner Yuzvendra Chahal and Gowtham tested positive and they are likely to be moved to an isolation facility. As per the isolation rules, a person has quarantine for 10 days if tested positive.

India could only play with five specialist batsmen in the last two T20Is of the series due to all these turn of events. Sri Lanka managed to defeat the depleted team in both the matches and went on to win their first T20I series since 2019.

Fans are surely not happy with the recent performances of the Indian team as they were restricted to a score of 81 in the final T20 against an opponent like Sri Lanka, which is not considered to be the strongest of teams currently in world cricket.

However, things took place which were not in anyone’s control and clearly there was not much that Shikhar Dhawan and Rahul Dravid could do about that.