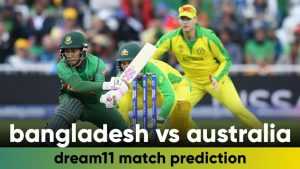 BAN vs AUS Dream11 Team Prediction Pre info: The 2nd T20 match of the five-match T20 series between Bangladesh vs Australia will be played at the venue of  Shere Bangla Stadium, Dhaka.

Bangladesh won their very first match against Australia in the shortest form of cricket i.e T20 cricket. With this win, they are leading the series by 1-0. They defeated the visitors by 23 runs in the low scoring match and won the match. Shakib and Mahmudullah scored 30 and 36 runs whereas, Nasun Ahmed took 4 crucial wickets and led his team to victory. Bangladesh will definitely look for another win and likely to carry their winning momentum.

On the other hand, Australia lost the 1st match by 23 runs. Their batting order completely destroyed by Bangladesh’s bowlers whic led them into pressure. Mitchell Marsh was the only who stood up on the crease and score runs for their team. He scored 45 runs, but his hard work goes in vain. Their batting unit is a matter of concern in which they should focus on. Australia need to win this match anyhow otherwise things will be very difficult for them, 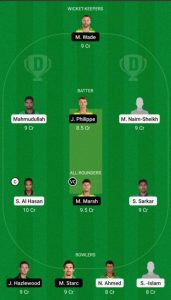 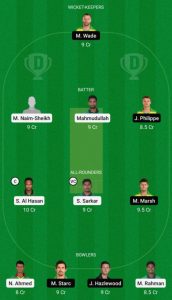