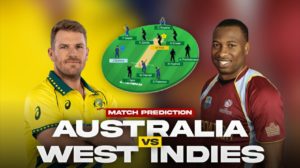 AUS vs WI Dream11 Team Pre Info: The 38th match of the ICC T20 World Cup 2021 will be played between Australia vs West Indies at the venue of Sheikh Zayed Stadium, Abu Dhabi.

This is the last match for Australia and they must win this match to secure their place and remain in 2nd spot so that they qualifies for semi-final. Australia has a made a great comeback in their previous match against Bangladesh and won with a big margin, after their pervious win they are have secured 6 points in 4 matches & is on 2nd position on point table. If Australia loses this match they will have to depend on the result of the match of ENG vs SA. So to avoid that situation Australia is looking forward to get a win here to get in the semi-final.

Whereas, the opponent  West Indies are out of the race of the semi-finals, as they have only  scored 2 points in their 4 matches and but they can will still play their best and spoil Australia’s party by defeating them. The Defending champion, West Indies is quite confident about the upcoming match they have defeated Australia by 4-1 in the T20 series also, they do have a better head to head record against Australia. so West Indies is surely in the mood to end Australia’s T20 WC  tournament by wining the upcoming match.

The 38th match of the ICC World Cup T20 2021 will be played between Australia vs West Indies at the Sheikh Zayed Stadium, Abu Dhabi.

AUS vs WI Head to Head: 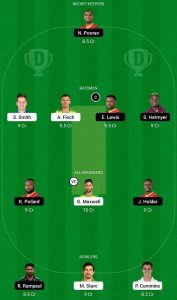 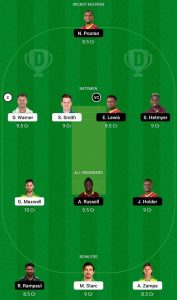 NOTE: While selecting your team, consider the points and make your own decision and make sure to edit the team if there is some change after the toss when playing xi is announced. So, taking help from the above post make AUS vs WI Dream 11 Fantasy Team Prediction.